The “Six traces of a brush” exhibition presents paintings of six contemporary artists from China (Bin Feng, Chunya Zhou, CongLin Cheng, Lu Luo, Chen Yun Wang, Zhuang Hong Yi) and, on their example, shows the results of confrontation between the Chinese art and the European culture.
The artists come from the Sichuan province, which is located in south-west China, near Tibet. The artistic studies that they graduated from were based on teaching of old techniques and on copying of acknowledged masters of Chinese art. Four of the artists moved to Europe, they live in Germany and the Netherlands (CongLin Cheng, Lu Luo, Chen Yun Wang, Zhuang Hong Yi), two stayed in the homeland, in the Sichuan province (Bin feng, ChunYa Zhou). Chen Yun Wang, living in Germany, for more than twenty years has been interested in figurative painting. His art is heavily influenced by the traditional Chinese art of ink painting, which requires immense skill, and by the art of calligraphy. Painting his ´european´ pictures in acrilan technique, he lefts traces of brush typical for Chinese tradition. CongLin Cheng also lives in Germany. His technical painting is rooted in European traditions (he paints with oil colours on wood and canvas), but in his subject-matter reaches out to the ancient Chinese culture, philosophy and religious beliefs. Zhuang Hong Yi, who moved to the Netherlands, creates painting diptychs which present the clash between traditional, folk art with the European culture. One picture shows finely cut and rearranged Chinese cutouts or earlier graphic works of the artist, another picture, typically European, is painted with bright, sharp colours. Zhuang has not fully ´liberated´ himself from the Chinese traditions when it comes to technique, his works are made in ink and acrilan, on rice paper. Lu Luo, an artist living in the Netherlands, expresses her revolt against totalitarian addiction of art to ideology using only colour. Her inclination towards strong colours can be seen in large, abstract pictures, painted with ink and acrilan on canvas. Their symmetric arrangements are often interwoven with the rhythm of Chinese folk motifs. European painting techniques have also influenced the artists who decided to stay in the Sichuan province in China. ChunYa Zhou paints with oil colours on canvas. Rejecting local colouring, he creates series of calligraphic, monumental ´Green dogs´, thrown into the empty space of a picture. The compositions are built without strokes, only with colour smudges.
The exhibition´s curator – Danuta Pałys
The idea of the exhibition was initiated by Elżbieta Middel-Gachowska, a citizen of the Netherlands, owner of the ´EM´ Gallery in Kollum. 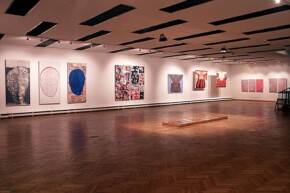 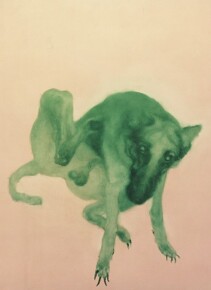 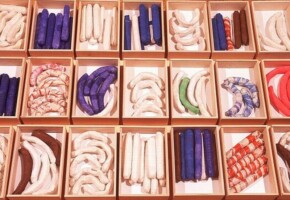