On April 15th, 2011, in the Kantorek Gallery, there was an opening of the exhibition of the works by Waldemar Byrger.
Waldemar Byrger was born on March 23rd, 1943, in Bydgoszcz. He studied at the Academy of Fine Arts in Krakow. In 1969, graduated under Prof. Wacław Taranczewski. He was a painter and also did functional graphics. His works can be found in museums in Szczecin, Olsztyn, Torun, Grudziądz, Bydgoszcz. He died tragically on October 21st, 2001.

I say:
– Over 100 years ago, Baudelaire already stated that nature is an artist’s ABC, but the ABC alone doesn’t constitute a language yet.
– And so it is in fact. Nevertheless, I would like to saturate my paintings with my own, human content, I would love to show my countenance through a given object. As I would through colour. I attempted this already when I studied, when I was mainly using a range of brown colours. With time, I started enhancing and enriching it. I think I also enhanced my awareness of goals. … awareness alone without emotional enchantment with novelty is not enough. First, you need that moment of spontaneous enchantment and then, a lot of intentional, work-shaping effort. … I would always recognise the primacy of what is unconscious. Art is always, to large extent, an adventure. Even when one consciously arrives at something, this “something” is always going to be a “great unknown”.
…I don’t like small, cosy formats, I always prefer larger ones…
– And “The Polish Madonnas”?
– It’s a secondary trend, sometimes one needs to move away to different areas. I hate literature in painting, but I like poetry, it inspires me — especially modern one, which speaks in allusions, just like painting uses certain allusions to reality and isn’t just its simple, unambiguous reflection.
We also talk about his academy years. …
– Yes, Leger, Picasso and Matisse are the masters. Notice how many of my works have something in common with stained-glass; while at the academy, I did some stained-glass designs, monumental paintings, for a wall triptych I even got an award from the vice-chancellor. But — as I already said — I approach painting, even still life, spontaneously. Only then there’s time for reconsidering and repainting. I repaint the same patch even several times, to make a colour “sound”.
(Zdzisław Polsakiewicz, “Między świadomością a przygodą” (Between Awareness and Adventure)
Gazeta Pomorska 1971 No. 228 excerpts)

… My works, that’s certain, are not conceived in pain, in torment. I don’t look for inspiration. I work quite systematically, but sometimes the ideas pop up rather unexpectedly. I usually make a lot of working drafts — using anything, sometimes even watercolours. When I manage to solve fundamental issues on the canvas — modifying them many times, nonetheless — I destroy the drafts. These are my private notes, I don’t show them to anyone. Sometimes I manage to complete a painting in one evening, but quite often I work on a single composition for several months. I usually paint two pictures simultaneously, to have an escape of sorts, when one of the paintings doesn’t go too well. Sometimes I get back to such a problematic concept after half a year, when I know exactly what and how I wanted to express in it. … (an excerpt from an interview: Ryszard Cz. Jaskuła “Waldemar Byrger Prezentacje” (Waldemar Bryger Presentations), Pomorze 1972, No. 2)

…. There are two exhibitions that I will always remember: at the legendary Bydgoszcz KMPiK and the Bydgoszcz BWA. Byrger emerged there with the full might of his talent. The fans of his talent will certainly remember his wonderful artistic reminiscences collected in the “Polish Madonnas” cycle inspired by poetry of Jerzy Harasymowicz. Enchanting still lives, synthetic representations of Polish landscape, figurative compositions. This art captivated with synthesis, colours, its freshness and perfection of rendition. … As an artist, he quickly found his own, extremely suggestive interpretation code. He was incessantly looking for new colour consonances. … Always starting with forms found in nature, he changed them into the world of geometry, or better yet — geometric abstraction. He painted carefully and in an extremely suggestive way. He clearly exposed colour as the most primary value in his works, as a medium of expression and subtle content. …
(Łukasz Płotkowski “Z żałobnej karty”, BIK 2001 No. 12 excerpts)

The exhibition is based on family collections of: Ms Ella Zaremba, Ms Renata Byrger and Mr Harry Byrger, and on the collections of Leon Wyczółkowski Regional Museum in Bydgoszcz. Thank you very much. 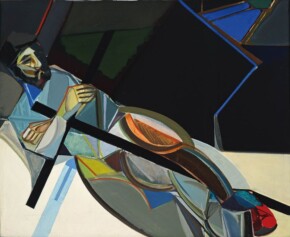