At the beginning of the 20th century, Claude Monet gave France one of his best known painting cycles, „ Water lilies” to this day, it’s the climax of the exposition at Musee Orangerie. The room where the enormous water lily pond spreads the walls, has become something of a Mecca for the lovers of impressionism. In May, some of this unforgettable experience of existing within an image (keeping things in proportion) could be felt by going to the „ Debut” gallery in the MDK-3. Normally grey walls were ripped up by intense green of images. They opened for landscapes full of moisture: expanses of water covered with round leaves and pink water lilies and wetland wilderness. They were flooded with a wave of green, blue and yellow contrasted with brown and mossy black outlining boughs of trees.
This is a passage from the text written by Ewa Urbańska after seeing my exhibition in May 2005 r.
The “Rainforest” project which I decided to carry out at the Municipal Gallery bwa in Bydgoszcz, was meant as a reference or return to this idea of ‘existing within an image’. But this time, I wanted it to be more literal. No, it’s not going to be yet another exhibition of my paintings, but, instead, a painting installation surrounding the audience. There will be giant trees, lianas, ferns, lush vegetation and flowers, all related to my “eternal” fascination and dreams of exotic countries and their wild, untamed nature. I will try to create my own vision of Arcadia, a place where I would be happy and feel that everything’s possible; an idea of my private piece of paradise to which I want to invite guests lovers of art and beauty of nature.
However, recently the idea has changed to some extent. It was influenced by my participation in a meeting of artists „ The Eye Never Sleeps” , which for 4 days and 4 nights between June 12th and June 15th took place in the palace and park of Lubostroń. It was an extraordinary experience, intense time giving the opportunity to get to know various types of art and many interesting people. As Daria Nowicka summed up: „ Silence, contemplation… culmination. Last moments to absorb art in all its colours. The projector illuminates the historical walls of the Lubostroń palace… people gather amidst nature to share this unusual atmosphere. The air still smells of paint, the presence of fans accompanies the nature, music can be heard. We’re heading to the next spectacles, dreamy stories, artistic confessions. We welcome dawn with the accompaniment of singing birds.”
At the end of that time, I went again to the garden, absorbed all its beauty, and I realized that for me this was just the culmination of a garden and a beautiful, wonderfully idyllic pond, surrounded by garlands of willow branches, leaves of burdock covered with duckweed and the leaves of water lilies. I stepped back into the world from the beginning of my story, inspired by the works of Monet. Clash of the Amazon jungle and our native nature, so well-known and loved, has now become the leitmotif. I’m going to the studio, excited with new idea.
Justyna Jułga 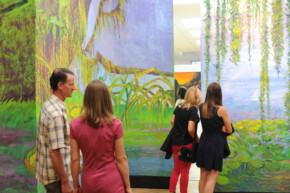 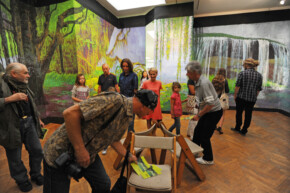 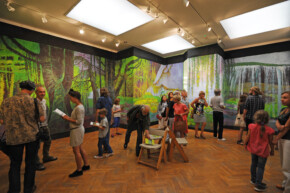 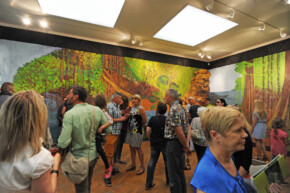 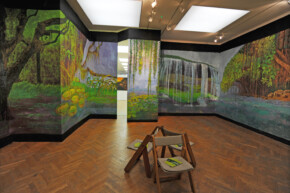