Open Vessels
As a part of the Cultural Night in Bydgoszcz, on June 22, 2007, at 19:00, the Municipal gallery bwa in Bydgoszcz presented a project by
TERESA MURAK. OPEN VESSELS

`Meeting on Route- celebration, relationships started while constructing and celebrating are like plants, which bloom only at the right time, to offer people their fruits, emotional bonds. /Teresa Murak/
Bridge of Meetings, Mostowa Str.
`A bridge is an emotional trace. It builds relationships: of human being with another human being, of human being with the world, with God, with oneself […] Its usefulness is immersed in the everyday reality, it connects two banks, opens for the future. A bridge – an emotional path, a route – cultural, civilisation, historic, generational, cosmic – joins heaven and hell, northern part of the city with southern one, over an international route (Paris-Berlin-Moscow), East-West. A bridge an overpass joins torn tissue of the city, past with future, private with public […].
A bridge, a green garden, is created for the neighbours, from the need of creating Joy in community. A bridge the trace of spiritual transformation of a human being, a meeting for the future. A bridge leaving the mystery to the Earth, as a beam of light, which rises to the sky, sounds, climbs to the sky.` /Teresa Murak/
For those who love wind (a closed object) Municipal gallery bwa in Bydgoszcz, Gdanska 20
From June 22 to August 15, 2007, the Municipal gallery bwa of Bydgoszcz will be presenting movies documenting previous projects by Teresa Murak. Also, a closed object called `For those who love wind` will be presented. It is dedicated to the memory of John Paul II.
project curator: Danuta Pałys 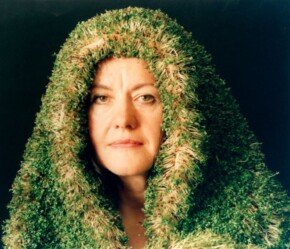