“Sylwester Ambroziak is one of the most important contemporary Polish sculptors, of the generation that debuted in 1980s, in the times of the New Expression, a leading trend of independent art, emerging in Poland during and after the martial law of 1981, as an expression of protest against the repressive regime. The traces of that protest are present in the works of many of the 1980s’ artists, especially in the works by Ambroziak. His rich portfolio of exhibitions includes numerous solo (over 70) and group (over 100) expositions in Poland, Germany, Austria, Belgium, France and Italy. “Glass beads” is a highly artistic project, representative of the current achievements in contemporary Polish sculpture; it’s original and modern, using the traditional sculpting techniques combined with multimedia (audio and video). The latest works by Ambroziak (those dated 2009-10), including “Beads”, can be considered a revelation both locally and internationally. Apart from purely artistic values, one should pay attention to the message of the “Glass Beads”: universal, humane, dramatic, magnified by the expressive form of the sculptures, by sound and video. The issues of alienation, loneliness, solitude are quite common in our Global Village, as if in spite of wide availability of mass-media, countless means of communication, the Internet, social networks etc. The “Beads” cycle will be complemented by a presentation of four large ( 3 m highs) sculptures from the “Dolls” cycle. Painted in vivid colours, extremely expressive “Dolls” invite for an intimate, concentration requiring presentation of “Beads”. It will be also accompanied by specially crafted sound recordings played in the exhibition room. An important element of the exhibition is projection of two experimental animations titled “Room” and “Shepherd”, prepared by the artist. The videos are presented through the multimedia projector onto the walls of the exposition rooms. One of the most important parts of the project is an album/catalogue, presenting the whole oeuvre of Sylwester Ambroziak against the background of the contemporary world and Polish art, focusing on its roots in the independent movement of the New Expression in the 1980s. The exhibition is presented at the Municipal Gallery bwa in Bydgoszcz, from July 29 till September 11, 2011. It will also be presented in the Museum in Bielsko Biała, Municipal Gallery Arsenał in Poznan, Museum of Modern Sculpture at the Centre of Polish Sculpture in Orońsk, and at other galleries in Poland and abroad. The Bydgoszcz exhibition is accompanied by the review of documentaries and TV films devoted to Sylwester Ambroziak and his works.”
By Krzysztof Stanisławski

“ABANDONED” FROM THE AUTHOR
The project titled “Abandoned” consists of a multimedia installation, including: sculptures, sound and video. It comprises four groups of figurative sculptures made of coloured epoxy reisin, sound recording and an animation on vide/DVD.
The figures, presenting children, are set up in pairs. Crouching, they touch each other with their backs, which connotes both their turning away from each other and mutual support. The groups of sculptures are hung (composition 1 at 60 cm, composition 2 at 160-800 cm from the floor, and some 5 m from each other) and spot-lighted. Vague sounds resembling wailing, a child’s cry, animal sounds come from the headphones and increase the feeling of alienation. The animation is both the commentary and the supplement of the installation.
The work was inspired by the issues of loneliness, solitude and losing family bonds, resulting from the increasing numbers of so-called “euro-orphans”, that is children deprived of their parent’s care due to migration for money. The embryo-resembling figures make it possible to generalise the experience of solitude related to this particular social issue as a variant of leaving children in general, which is characteristic for the Western European civilisation. It is visible in the legal status of human foetus, which in many countries is deprived of its basic right to exist. It concerns questioning the role of the family as the primary context for growing up and development of a human being, which, in the future, must result in the increasing sense of eradication, both from the family and “against all calculations” from the forms of responsible social coexistence.
The message of the project is emphasised by both its form and its exposition. The fact the figures are hung illustrates “losing the ground”, “eradication”; the fact they can be rotated and turned illustrated their exposure to unlimited relocation, manipulation, objectification.
Sylwester Ambroziak 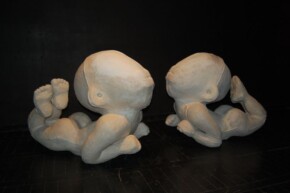