It’s time to present the films that we will show this year. We will start with a show of video artists “Sea-Meadows Measureless”, which will take place in The Municipal Gallery bwa in Bydgoszcz. Five artists will take part in the show. Martyna Kielesińska is his curator.

The selection of artists invited to participate in the show was preceded by extensive research in the field of Polish video art. In my search, I was assisted by my artist and curator friends. I asked them to pick young video artist they found interesting. As a result, while putting the show together, I got to know the work of several interesting artists. From this group, I chose people whose work best suited the idea of ​​the Sea-meadows Measureless show. The inclusion of individual artists in the show was the result of different circumstances. Marta Hryniuk was recommended by my curator friend, Gaba Warzycka-Tutak. I knew Kuba Matuszczak from a small space in Poznań, the Artel gallery, where video screenings were held. I got acquainted with the work of Patrycja Włodarczyk during her diploma thesis exam. I have known Magda Lazar for a long time and hold her work in high regard. The same applies to the work of Adrian Kolarczyk. From the point of view of a video artist, I was presented with the opportunity to look at other video artists and their latest work. My final selection of works was based on my determination to mold them into one story, told from different perspectives. I have been thinking about putting together a show of this type for a long time. I am glad that thanks to the invitation from the Fonomo Festival and involvement of the artists, this idea became reality.
Martyna Kielesińka

THE ARTISTS:
Adrian Kolarczyk
Mr. Kolarczyk graduated from the Jagiellonian University in Krakow with a degree in Film Studies. In 2012 he became a student of the Faculty of Intermedia at the Academy of Fine Arts in Krakow. He then transferred to Poznań, where he is currently studying Intermedia at the University of the Arts. His fields are object art, site-specific art, films, photography and sound.

Summary of the video:
“Forensic examination” (2015)
The video involves the juxtaposition of dowsing performed in my apartment and found footage from a German automotive trade show from the 1990s. There is something objective in the way the dowser moves, resulting from the study of space, and not the objects located in it. On the other hand, the movements of the man filming cars result from the placement of objects in the exhibition space. Both ways of viewing reality are based on exploration, however, the former is determined by something invisible – the energy present in a given space, while the latter is visual and affects the sense of sight

Kuba Matuszczak
Born in 1995, a student of the Department of Intermedia in Poznań. His areas of artistic activity include drawing, animation and video shorts, DIY and sewing. Mr Matuszczak prioritizes the creation of “his own” content, without using ready-made forms and rules. He describes himself as an amateur and treats it as an opportunity to constantly learn new skills and win new territory for self-sufficiency in everyday life.
Included in the Featured Artists catalog by GIPHY, Mr Matuszczak participated in numerous festivals, including Fuchsbau (Hannover, 2017), Blask/Brzask [Light/Twilight] (Łódź, 2017) and shows such as Co Było Raz, Zostaje na Zawsze [What happened once, stays forever] at the :SKALA gallery (Poznań, 2018), Gra znaczeń [Game of meanings] at the MOCAK Museum of Contemporary Art (Krakow, 2018) or Lion Dance at the 9/10 gallery (Poznań, 2017).

Summary of the video:
“Goals” (2016)
On the one hand, a token of a surprise date, on the other hand, a documentary account of struggle against the hostility of inanimate objects and our own clumsiness. The starting point was the desire to celebrate the purchase of the couple’s first car. The need to do everything on your own terms and exactly the way you like it turns out to be of utmost importance, even if people have no clue how to do things and regardless of the final outcome. Fiasco or triumph?

Magdalena Lazar
In the years 2006-2012, Ms Lazar studied at the Faculty of Graphic Arts at the Academy of Fine Arts in Krakow. She graduated with a master’s degree in Digital Imaging, the class of Professor Waldemar Węgrzyn. In 2010-2011 she studied in the class of Christiane Möbus at the University of the Arts (UdK) in Berlin. In 2019 she completed her doctoral thesis, titled Broad Daylight all Night Long at the Faculty of the Arts of the Pedagogical University of Krakow, where she currently teaches Digital Graphics.
Ms Lazar’s art frequently refers to improbable real life events and formulates her doubts as to the validity of rigid structures.
Works by Magdalena Lazar were presented at many shows in Poland and abroad, including at the following galleries: Bunkier Sztuki and Cricoteca in Krakow, BWA in Katowice, BWA in Tarnów, MS2 in Łódź, Centrala in Birmingham (UK), Chongqing Dimensions Art Centre (DAC) in Chinach, Album Arte in Rome as well as Institut fur Alles Mögliche in Berlin. She also worked as a curator at the Motion vs Rest show at Chongqing Dimensions Art Centre (DAC) in China, and What We Do in the Shadows at Widna gallery as well as at an exhibition in a small scale SM Dębniki gallery.
Atoms, one of her pieces, was included in the online library created by the National Audiovisual Institute (Ninateka).

Summary of the video:
“Flow” (2013)
Flow is the state somewhere between satisfaction and euphoria, resulting from complete engagement in a particular activity. According to Mihaly Csikszentmihalyi, flow can be understood as the term to describe the state of mind in which one can concentrate entirely on a given task and derive pleasure entirely from the very completion of the task. People experiencing euphoria often describe it as being “carried by a wave” or “floating in water.” The final scene of the two-channel video piece exposes an important detail hidden under the layer of daily routine, the starting point of a stress-free journey into the unknown. It is a sensual, meaningful, mesmerizing story, and following the water is its main theme. It can be perceived in many different ways. One of the clues may be the fact that in Slavic beliefs the sound of flowing water appearing in one’s dream presaged taking a weary traveler under one’s roof.

Born in 1991 in Warsaw, Ms Hryniuk graduated from the University of the Arts in Poznań, the Department of Painting as well as the Szczecin Academy of Arts with a degree in Mutlimedia. Ms Hryniuk is currently studying at the Piet Zwart Institute in Rotterdam. She is a member of the nomadic artistic and curatorial Silverado collective. She has participated in shows in Poland and in other countries. Ms Hryniuk resides and works in Rotterdam. She is the recipient of the Young Poland scholarship (2017) as well as the scholarship funded by the Minister of Culture and National Heritage (2015).

Summary of the video:
“Cold Body Shining”
The North Sea, the mouth of the Meuse River. This port was built in the 14th century, and its strategic commercial significance as part of the Dutch East India Company had an enormous impact on the dynamic development of the city of Rotterdam. By the end of the 16th century, more than 800,000 Dutch and Friesian people, a large part of the local community, were herring fishermen. Fishery, in particular fishing for herring (referred to as “Great Fishery” at the time) was an important branch of the emerging economy, with herring its main export. It was then that a special type of ship, called “Haring Buis” was built, and put to use, thanks to which the fishermen could follow herring shoals all the way to Dogger Bank and other places away from the coast of Holland, thus remaining at sea for many months. [1] The female narrator guides us through dreamlike movie sequences. We are submerged in ubiquitous water, we experience it practically with all our senses. The camera is immersed in it, only to resurface and operate between close ups and aerial photography. Cold Body Shining, however, is primarily about light. The sea glows due to the phenomenon of bioluminescence from dead fish. Dead herring and mackerel begin to emanate light in the dark. This effect is due to the greasy phosphorescent substance found on the surface of their skin. The light is visible up to four or five days, followed by the process of decomposition. [2]
[1] See W.G. Sebald, The Rings of Saturn, 2009
[2] See Pacific Rural Press, Volume 4, Number 25, December 21st, 1872

Patrycja Włodarczyk
Born in 1991, Ms Włodarczyk graduated from the Academy of Fine Arts in Krakow, the Faculty of Intermedia (degree in Archispere in the class of Professor Grzegorz Biliński). She is a member of the Option group and co-founder of the Option gallery. Main interests: installation art, video and performance.
Summary of the video:

“Garden of Love” (2019)
A place filled with symbols and intense emotions one feels when falling in love. Happiness, desire, fulfillment, excitement, but also sadness, pain, suffering and disappointment. The garden is a symbolic representation of the emotional sphere and the cyclical nature of life and death. Individual stages of plant growth represent individual emotions. There is a bathtub in the garden. It is filled with water, providing a symbol of rebirth, liberation from old emotions and willingness to start anew.

Martyna Kielesińska
Born in 1991 in Kielce, Ms Kielesińska graduated from the Academy of Fine Arts in Krakow, Department of Painting (degree in the class of Grzegorz Sztwiertnia). She studied at the Academy of Fine Arts in Warsaw and at the University of Art in Berlin, in Hito Steyerl’s class. Her fields are video art, installation and painting. In her works, Ms Kielesińska recreates interchanging moods and situations she once witnessed. Her interests revolve around the simplicity within the complexity of everyday life, the causes of reactions and types of behavior of others. She often works with found materials, using the found footage technique. Her works were presented in group shows at the Gdańsk Municipal Gallery 1, BWA Katowice, Bunkier Sztuki in Krakow in 2018 as well as at individual exhibitions including BWA Katowice and Wozownia gallery in Toruń. Ms Kielesińska is the recipient of the 2018 Scholarship for the Arts from the City of Krakow. She resides and works in Krakow. 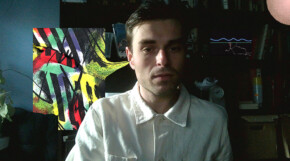 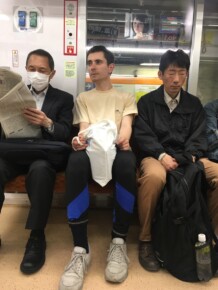 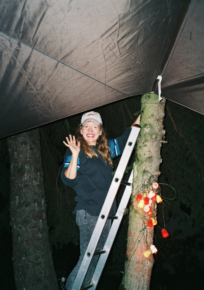 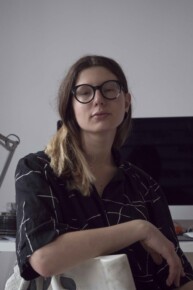