The interdisciplinary exhibition of artists related to the Academy of Fine Arts in Wroclaw. The presented works include paintings, sculptures, artistic installations, video-art and photography.
There was also place for performance, both in real life and in the form of documentation. The artists presented have an important position in Polish and European art, among them there are teachers: Konrad Jarodzki, Paweł Jarodzki, Józef Hałas, Krzysztof Skarbek, Zdzisław Nitka, Janusz Jaroszewski, Paweł Lisek, Paweł Lewandowski-Palle, Wojciech Pukocz. Some of them are famous for important works of Polish expression art of 1980s. The project is aimed to present the important role of the academic circles in shaping the Wrocław structuralism, but also the influence of their art on the perception of the phenomena of Polish art. The output of the Wroclaw artists, their activity and often an uncompromising nature will become a contribution to the discussion on the artistic abilities of particular circles in Poland. The comparison of the broad spectrum of artistic works with the activities in our region may result in activation and a discourse on the condition of Polish art.
The exhibition presents both the traditional forms of artistic expression and works created using the latest means of expression.
The Municipal Gallery bwa has a long tradition of presenting the achievements of artists from different regions of Poland. So far, we have presented the Torun, Gdansk and Poznan artists related to video-art.

Excerpts from the catalogue of the exhibition:

“Structure of things, structure of emotions, structure” – that’s the title of the exhibition presenting the output of my colleagues from the Faculty of Painting and Sculpture from the years 2008-2010. I’m very happy that the audience in the Municipal Gallery bwa in Bydgoszcz has the opportunity to see the works created in the trend specific for the artistic circles of Wroclaw. As a matter of fact, the idea of structuralism has been present in the Wroclaw art almost forever. Nowadays, in the first decade of 21st century, structure and structuralism are still well alive and interesting for new artists. And, besides the traditions of painting, sculpture and drawing, there are completely new experiences of the new media art.
Prof. Jacek Szewczyk, Vice-Chancellor of the Academy of Fine Arts in Wroclaw

There are outstanding and renowned painters and sculptures, winners of great, important art competitions, festivals, reviews, teachers with scientific degrees (twelve) and their collaborators. But titles don’t paint and don’t sculpt. This exhibition presents the current art, from the end of the first decade of the first century of the third millennium – the art of various generations. It comprises the output of almost all artists-teachers teaching painting, sculpture and artistic education. Selection of works was a private matter of each participant; usually, as in some cases it was a common decision of the author, curator and their collaborators. Some of the works were created especially for this exhibition. I would like to draw your attention to the consonances, but also to the differences that can be seen already on the first sight, and to difference in the structure systems. It’s a diversified offer, a journey along the traces of various structures. At the exhibition I find works at which I look with real pleasure and pride. Nowadays, what is the characteristic of the Wroclaw art, what are its recognisable, separate values? It’s not my role to give a qualified answer, but I’ll say this: – of the condition of the Wroclaw art (and the Polish one, too), including sculpture and painting, which are said to be in permanent crisis, I think well.
Prof. Paweł Lewandowski-Palle

I went through the massive material depicting the achievements of the artists from the Faculty of Painting and Sculpture of the Academy of Fine Arts. I have seen many of the works previously at various exhibitions. First thing that can be noticed is the multitude of artistic propositions. There”s painting, drawing, sculpture, other traditional forms of expression, but the new ones as well, resulting from the possibilities offered by modern technology. It’s good that within painting itself, which is so deeply explored, we still can find various, often novel solutions. Spatial forms, together with sculpture, are becoming one of the most interesting phenomena in the world art. The media have become parental, prolific and puzzling. The whole of this enormous variety opens up a great book of knowing. Knowing not only art itself, but also the phenomena the art touches upon. In the light of what I wrote above, the academy becomes the centre of intellectual anarchy. The only place of making choices. The place for emphasising emotional values, for shaping the imagination and moulding an individual. Which is all that which increases the worth of man in the context of culture, social phenomena and economy. It emphasises the sense of existence, in spite of the values being put on the side-lines. It’s not possible to exist in an attractive world without any knowledge of existence and essence.
Wacław Kuczma, Director of the Municipal gallery bwa in Bydgoszcz 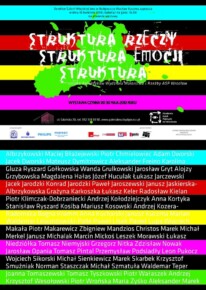