The competition of visual arts for the artists of Bydgoszcz is organised by the Society for Cultural Initiatives in Bydgoszcz, with participation of the Municipal Gallery bwa in Bydgoszcz. This year’s competition was held for the eighth time, the themes of the previous ones: 2009 – The Yard at 62 Dworcowa St.; 2010 – The Yard, 2011 – Bridges; 2012 – Inspired by Wyczółkowski; 2013 – Streets; 2014 – Home; 2015 – Us. The originator of the contest is Mr. Dr. Stefan Pastuszewski. The first two post-competition exhibitions took place in the Culture Club “Orion” of the Bydgoszcz Housing Cooperative. Initially the competition was closed, that is some 20 artists received an invitation to participate, and each was asked to create a work that was great or small in size. I suggested to open the competition for a wide range of artists. At the same time, worried that all of the wouldn’t fit in the space of the Kantorek gallery, we decided to introduce the small format. The first small format exhibition was “Streets”.

For this year’s competition, there were 74 works submitted — paintings, drawings, graphics, collages, sculptures and photographies by 33 artists from Bydgoszcz. On November 9, the Commission making selection for prizes and distinctions gathered, consisting of Prof. Aleksandra Simińska, Katarzyna Wolska, Jerzy Riegel, and, traditionally since the beginning of the competition, Elżbieta Kantorek. The Jury awarded prizes and distinctions to eight artists. The prizes were funded by: The Marshall’s Office of the Kujawsko-Pomorski district, most of all by the Council of the City of Bydgoszcz and by private sponsors. And the names of the awarded artists will be revealed at the opening on December 9th.
Elżbieta Kantorek 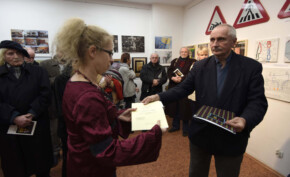