Due to the threat of the spread of SARS-COV-2 coronavirus, the rules of visiting the Gallery have changed. You can find them on our website by clicking HERE. Due to these changes, there will be no vernissages in the nearest future.

The exhibition presents paintings by Oskar Gurbada. His paintings revolve around such trends as surrealistic, symbolic, pop-cultural, chaotic and escapist painting. Irrational visions resulting from free associations are presented. The artist’s paintings are contrary to the logical order of reality. His painting serves as an ambiguous means of expression of the presented symbolism and an escape, detachment from reality. Surprisingly, the artist makes his costumes from waste. The exhibition will present parts of the series of works, including Skorupy (Shells), Eksponaty (Exhibits), the title work consisting of eight segments measuring 100 × 150 cm, and several independent paintings.

Oskar Gurbada about his selected cycles:
Skorupy (Shells)
This is a series of six paintings referring in their style to the Baroque and Surrealism. The works present models dressed in “shells” – surrealistic costumes created from waste. The paintings are created in a dark, brown, warm Baroque colour palette using sharp sidelight. The monochromatic colour palette is broken by strong, artificial blue lights referring to impressionism. The main inspirations for the series are the works of Jacek Malczewski, Rembrandt and Caravaggio. The outfits in which the characters are dressed were created by me by hand from waste such as car tyres, bicycle tyres, steel scrap, coats, jackets and old clothes. The name of the series refers to the ossification of the form of classical painting, the multi-layered method of painting and the costumes of the models. The paintings bring to mind iconographic scenes and representations of saints through character poses, props and flat, relief backgrounds. The backgrounds consist of post-industrial views in which space or a reference point is hard to find. This results in the suspension of the model in an undefined reality. The symbolic nature of the background and the literary character of the models’ poses creates great interpretative possibilities for the viewer, indicating only the creative aspect of the images.

I created you in my image
It is a large-format image in acrylic technique consisting of eight segments – 100×150 cm canvases. The work presents a dialogue between an unidentified character and a hybrid creature occupying most of the canvas surface. The figure in the foreground is naked, faceless. He sits on a plateau, on the same elevation one of the legs of a living monument rests. The monument stands on several bent columns, each of which consists of heads and legs of different animals. The character has no face. He is an Everyman. It could be any one of us, stripped completely of civilization, technological achievements and social complexities. The perception of the image is imposed by the title – “I created you in my image.” In the space of the image, the Everyman is the creation. His silent dialogue with the monument is a conversation with a god, a supernatural force, a creator. The colossus consisting of animals is a symbol of nature and its forces. He wants to convey the immensity and power of nature, which is both a creator and a destroyer. In the face of this power, the figure is only an observer. On the other hand, the man here is a wanderer. He reached the end of his path, found the absolute or paradise.

Exhibits
A series of relief paintings with a leitmotif of animal heads. They contain a lot of pop culture symbolism, it’s a silent cry in times of overflowing information and stimuli. This also refers to the heads in the pictures, looking as though they were cut off, surrounded by an excess of form, intricate technology and dirty painting form, exposed to the foreground like… exhibits in a shop window.

The exhibition is also accompanied by online children’s workshops “Czapki z głów” (Hats off) – workshops for creating artistic headgear for children. Everyone can take part in them, with just a few necessary utensils such as 1 mm cardboard, brush, acrylic paint (any colour), double-sided tape or a clip, ruler, tailor’s measuring tape, pencil, scissors, a needle with thread. During the workshop, we will refer to the Skorupy series, for which the artist hand-made surrealistic costumes from waste before painting them.

Oskar Gurbada – a painter from Bydgoszcz, born in 1993. For many years connected with Toruń. Assistant at the Faculty of Fine Arts at the Nicolaus Copernicus University in Toruń at the Painting Department. A graduate of Painting at the Nicolaus Copernicus University in the studio of prof. Piotr Klugowski.
Graduate of the Leon Wyczółkowski Complex of Art Schools in Bydgoszcz.
Participation in several group exhibitions, among others at the Mazovian Centre for Contemporary Art “Elektrownia” in Radom and the Centre for Contemporary Art in Toruń.
Participation in several individual exhibitions, among others in the Gallery of the Library of the Kazimierz Wielki University n Bydgoszcz.
He is passionate about blacksmithing, scrap metal sculptures, tattoos, applied arts and drums. 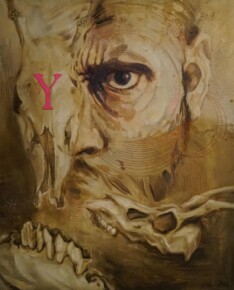 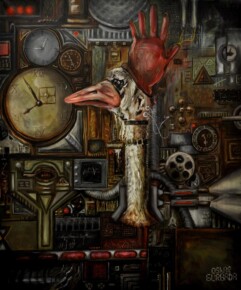 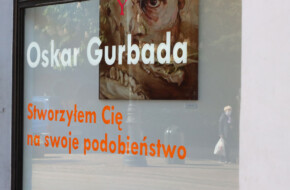 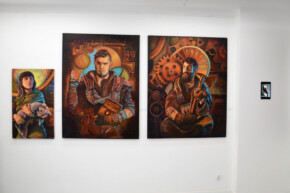 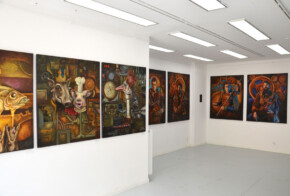 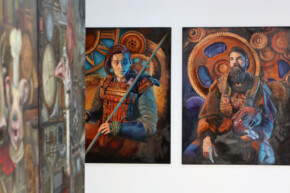 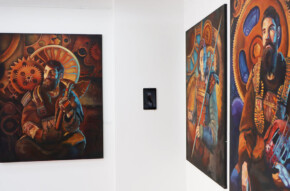 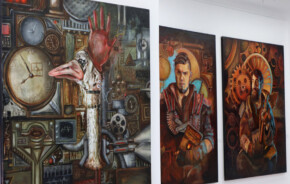 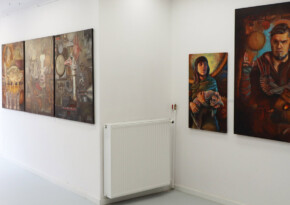 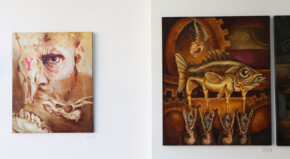 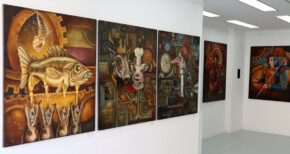 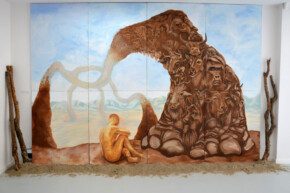 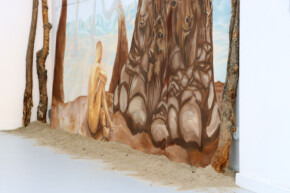 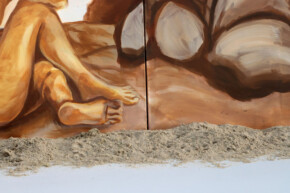 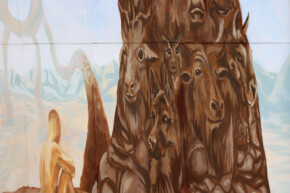 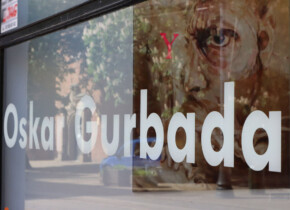