Russian Non-conformists
The Collection of Russian Freedom
Russian non-conformism is an important, but not well-known today, art phenomenon. Russian non-conformists were critical towards the system of the country in which they lived.
They juxtaposed it to their own system of values.
It can be already seen In the works from the 1960s: there is neither sun, nor joy, as the overall mood had been dimmed, just like the mood of the whole society. The only thing left is the search for truth. More and more often the word „non-conformism” was heard; it was understood as rejection of the official ideology, the ideology of “real socialism” and „ partyism in the art”. The non-conformists did not form any association or group, they were just various artists, each of them had their own style and their own views; the only thing they had in common was the sense of protest, which, after many years, subdued any other emotions. The artists, as usual, used to work a lot. They exhibited their works mainly in private apartments. Sometimes, these „ home exhibitions” were visited by foreign guests, journalists and diplomats, who, from time to time, bought chosen works for private collections and took them abroad. Those exhibitions were not available to professionals, while for diplomats or journalists the underground character of an exhibition was decisive
For many years, the non-conformists works were presented in the West, bought by foreign collectors, as well as some museums. Some artists, who were voluntary or forced emigrants, gained fame not only in Europe alone, but also in the United States.
The works of the artists remaining in the Soviet Union gained recognition abroad and made it easier for Soviet alternative art to win a wider audience.
One other peculiar thing is worth noting: in their search, the non-conformists in 1950s and 1960s were adopting all world trends in art, remaining totally diversified both in their spirit and artistic concepts, while in their ways of thinking they still were the Russian artists, preserving cohesion with classic Russian avant-garde. This is what makes them different from other artists and remains their great advantage.

At the exhibition in Bydgoszcz some fifty works will be presented, created
using various techniques and formally diversified (from lack of figuration to expressiveness, from subjectivism and symbolism to philosophical concepts), from such well-known Russian artists as: Kubakov, Nemuchin, Sverev or Jankilevski.
Most of the presented artists played an important role in the development of free Russian art. Their works are widely recognised and they convince the audience that thanks to the attitude and courage of the artists their works won recognition not because of their fate, but because of their achievements on the field of art.

Beata Kaźmierczak
/based on articles by:
Dr Michail German and Jevgeni Kotschanov/
A CD catalogue of the works is published for the exhibition. 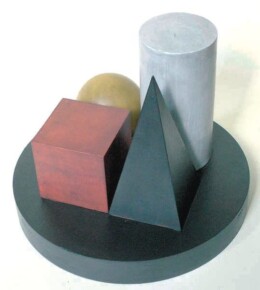