SHOW ME SOME LOVE
This year’s edition of Performance Night is inspired by a letter assigned to Albert Einstein that I found online. It is about the awakening of the stimulating energy of love and giving visibility to love.
Performances about nourishing oneself with love will be presented by Léann Herlihy from Ireland and Grzegorz Bożek from Poland.

Grzegorz Bożek – born in 1988 in Owczarnia in the Lublin region/Poland. He lives in the Poznań Łazarz / Poland. Between 2008 and 2009, he spent the year in Lublin at the Faculty of Art of the Maria Curie-Skłodowska University. He graduated in 2015 from the University of Arts in Poznań / Poland. He works with poetry, moving in the areas of painting, text, performance and radio plays. In visual and verbal events, he tells the story of a personal experience of peripheral situations that take place in the meantime, in the shadow of political and cultural events. At the same time, since 2010, he has been making documentary film notes. Trainee of the Speaking History programme in Lublin.

Léann Herlihy is a performance artist based in Ireland. Her practice attends to the intersection of
invisible power structures; addressing the position of the female body as a focal point of repressed
histories and political desires. Herlihy’s performances are raw, as she pares back her gestures to
pure bodily instinct and improvisation. In her work, clothing is regarded as an object rather than a
consecrated costume – simultaneously concealing and exposing the performance artist. Enigmatic
in form, she often accentuates these objects in relation to her body, exploring their history as she
sieves through their multiple readings. The use of endurance in Herlihy’s practice highlights the
exaggerated protraction of time, all of which becomes enhanced by the symbiotic relationship with
the audience; where the very act of their continued observation, in itself becomes a ritualised
behaviour.
Léann Herlihy graduated with a first class honours in Sculpture & Spatial Awareness from the
University of Fine Arts Poznań in 2016. She has performed both nationally and internationally, in
countries such as Ireland, UK, Iceland, Norway, Germany, Poland and Slovakia, with her work being
reviewed even further afield in the USA.
In 2017, she was awarded the Travel and Training Award from the Arts Council of Ireland, as well as
the Travel Award and SIAP (Support for the Individual Artist Programme) Award from the Arts
Council of Northern Ireland. 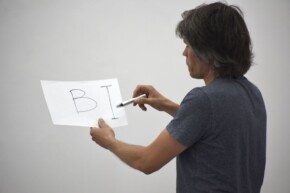