Through the PRZYTULIA happening, the artist explores the gestures of self-patting. She seeks relaxation and relief for an alienated organism. She invites us to practise self-loving. The sequence of gestures is inspired by therapeutic techniques.

bio:
Dobrawa Borkała (born in 1990) is a visual and breath artist, as well as a psychologist, an EMDR therapist, and a Buteyko breathing method instructor. Graduate of the Academy of Fine Arts ENSBA in Paris and SWPS University in Warsaw.
She examines the physical and mythical roles of air and breath and the affective atmosphere they produce. She is working on the Breathing Alphabet. She develops the project of Respiratory Synchronization in the space of performance, visual arts, therapeutic and symbolic recording – combining the theme of bodily, social and ecological experiences. In 2018, she initiated the Experimental Breathing Choir (Eksperymentalny Chór Oddechowy – EChO) in Warsaw.

Action:
My and your compassion. My and your dance. My and your provocation. My and your bodies. My and your cackling. My and your resistance. My and your concern. My and your birth. My and your dying.
What is evil?
Evil is patriarchy. Patriarchy is evil. The patriarchy appropriates, colonizes, exploits, rapes and murders. It was built on foolishness, which in turn exuded the worst attributes assigned to human animals. Authority full of pride, hypocrisy, lies and hatred decides about the chaos of this world. It must now be destroyed for the OTHER – excluded inhuman and human.
“I live in a violent country, hence my art, which is also violent. My body is not individual, but a social body, a common body, a global body. Being me, or looking from my perspective, from the perspective of her, his, their experiences, because we are all at the same time ourselves and others. A body which is the body of many people, which is still being created, which incessantly opposes, because the world causes pain, restrains, suffocates, destroys; we, who are different, let’s not try to survive, but react, oppose, create. [Regina Galindo] translated by Monika Ujma

Jacek Jacx Staniszewski
Author of visual installations, sculptures, posters and graphics for music publications. A graduate of the Faculty of Painting and Graphic Arts at the Academy of Fine Arts in Gdańsk (currently the Academy of Fine Arts), since 1992 lecturer at the Academy of Fine Arts. He created and runs the Social Propaganda Studio at the Faculty of Graphic Arts. He does a kind of visual performance in which emotions as a superior factor create strong relations with the recipient. He has presented his activities at the Zachęta Gallery, the National Museum and the Centre for Contemporary Art in Warsaw, and recently at the Biennial of Contemporary Art in Nakanojo 2015 (Japan) and Göttingen 2019 (Germany). Founder of music bands Chlupot Mózgu and Maszyna do Mięsa.
Dorota Androsz
Actress, performer, director. A graduate of National Academy of Theatre Arts in Kraków, branch office in Wrocław. Between 2004 and 2007, she was associated with the Teatr Polski in Bydgoszcz. Since 2007, she has been an actress at the Wybrzeże Theatre in Gdańsk. She has independently directed performances “At the Black Lake” by Dea Loher, and “fetish.wtf”. In 2018, she made her debut as a director at the Teatr Polski in Bydgoszcz with Pascal Rambert’s play End of Love. She assisted in the performance of Hunger directed by Luka Perceval at the Thalia Theater in Hamburg. She has been making readings as part of PC Drama and Residence Sopot non Fiction. As a performer and author of lyrics, she has cooperated with Anna Kalwajtys, Artur Lis, the Teatr Amareya in Tricity, Mikołaj Mikołajczyk, and the GS Zakrzewo Performance Group.
katarzyna lewandowska
Art historian, feminist, curator, activist, anarchist, activist for the rights of inhuman and excluded beings. In her activities she focuses on the search for carnality in contemporary art, using the discourse of feminist philosophy. She is interested in engaged and total art, which enters into critical discourse with the authorities. The researcher also deals with the motives of femininity in Tibetan art. Author of many exhibitions and a series of exhibitions and activities, among others: Feminine, Anarchia, Młode (together with Dorota Chilińska), Danzig meine Liebe, Rebelle (together with Dorota Chilińska). Founder of magazines: “Splesz” and “Death of the patriarchy.” Lecturer at the Academy of Fine Arts in Gdańsk. 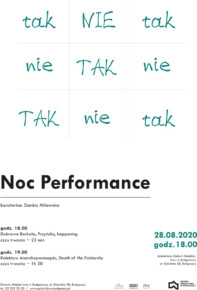