From March 7, the Municipal Gallery bwa in Bydgoszcz will be presenting the post-competition exhibition of the 18th International Salon of Anti-war Cartoon Kragujevac 2015. We’ll see dozens of works denouncing the war and at the same time showing the threat its destructive nature brings to people and the planet. The cartoonists are determined to laugh at war, judge it and present its absurdities. The opening ceremony for the exhibition will be held on Monday, March 7th, at 6 pm.
For the Kragujevac-organised competition, there were record 793 cartoons submitted by 292 authors from 55 countries from all the continents. Among the hundreds of the submitted cartoons, there were real works of art. The international jury presided by a Turkish caricaturist Metin Peker, president of the Turkish Association of Caricaturists, had a difficult task of choosing the best works. The jury decided to award the Grand Prix, the award of the International Association of Peace Messenger Cities, to Mr. Xiao Qiang Hou (China). The gold badge was awarded to Andrei Popov (Russia), the silver one to Jovo Skomac (Serbia), the brown one to Konstantin Kazanchev (Ukraine), and the award of the prize of the Mayor of Bydgoszcz was presented to an Ukrainian artist Sergey Semandayev. At the initiative of the Office of the City of Bydgoszcz, the Municipal Gallery bwa will host the exhibition on March 7th-April 3rd, 2016. The exhibition will be also presented in other Polish cities: Płońsk, Wieluń, Oświęcim.
The Competition of the Anti-war Cartoon is organised every two years since 1981, in Kragujevac (Serbia). The initiator of this project were the graphic artists from Kragujevac and the journalists of the weekly "Svetlost". The first competition in 1981 celebrated the tragic events of October 21st, 1941, when the German fascists killed thousands of inhabitants of Kragujevac and the surrounding area. The Salon of Cartoon, known as the anti-war conscience of the world, is a message promoting peace in the world, travelling as an exposition from town to town around the world. The International Exhibitions of Caricatures are highly appreciated by the artists and peace organisations around the world, consistently contributing to spreading of peace, understanding and tolerance in the world. The Salon of Cartoon has already visited Bydgoszcz several times in 2005, at the Municipal Gallery bwa in Bydgoszcz; in 2007, at the Nad Brdą Gallery of the University of Economy; in 2009, at the Granaries on the Brda; and in 2014, in the Municipal Gallery bwa.
On October 20-21, 2015, the Deputy Mayor of Bydgoszcz, Mirosław Kozłowicz, and the representatives of the international cooperation of the City of Bydgoszcz paid a visit to our partner city in Serbia, invited by the Mayor of the City of Kragujevac. The delegation took part in the celebrations of the Month of Memory. During the anti-war ceremony, on October 20th, 2015, there was the award ceremony and the opening of the exhibition "International Salon of Anti-war Cartoon Kragujevac 2015", which took place in the Gallery of the Museum of Memory. Traditionally, the Mayor of Bydgoszcz endows one of the main prizes in the competition. In 2015, the Award of the Mayor of Bydgoszcz, in the amount of 750 Euro, was won by an Ukrainian artist Sergey Semandayev.
At the opening of the exhibition in the Municipal Gallery bwa, we will host the delegation from Kragujevac: The Deputy Chairman of the Council of the City of Kragujevac, Ms Slavica Kominac, Director of the Park of Memory in Kragujevac, Mr. Slavoljub Jovanovic and the curator of the Park of Memory, Katarine Babic 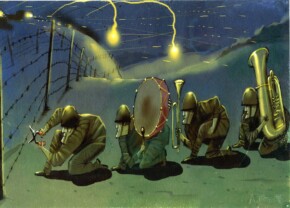 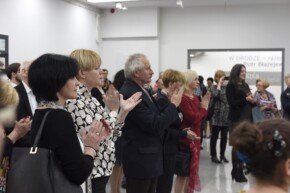 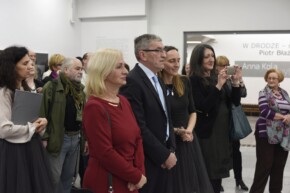 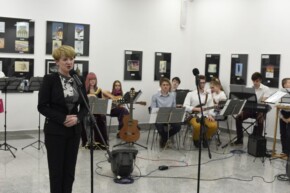 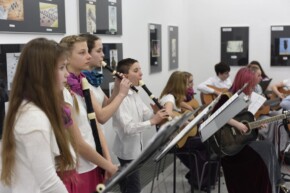 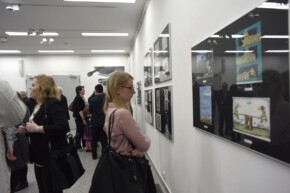 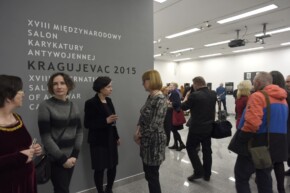 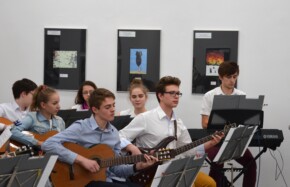 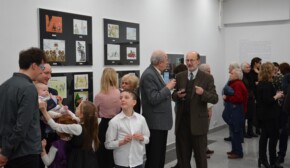 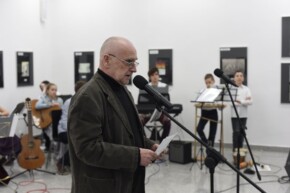 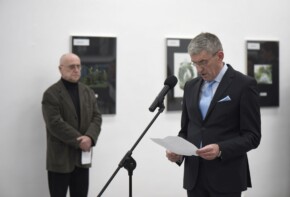