The artist examines the stability of symbols functioning in different cultures and religions. He ponders over their validity in the modern civilisation, over the degree to which they are still vehicles of meaning, and how much they fulfill esthetic functions alone.
He is interested in slow changes, reasons for depreciation of meanings, he wonders if it is possible to assign new meaning to them. To a simple, wooden cross, the symbol of Christianity, a second cross is nailed with four nails it is a granite cross, interpreted as the essence of the idea of Crucifixion, or maybe as a forgotten relic of the past, or just a fossile. Mariusz Gill himself allows for multitude of interpretations of his art. At the same time, he appreciates the power of symbols influence, which for centuries have been shaping human consciousness, created systems of values. 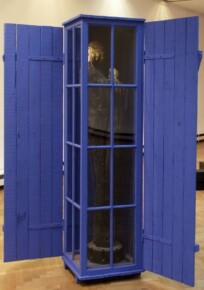