“We all live in this world where good and evil, sin and hatred walk hand in hand. To close one’s eyes to one of its halves in order to live in peace and safety it’s as if we wanted, for more certainty, to walk among precipices and chasms” Oscar Wilde
We call ourselves Christians. We know what good and evil are. We know what hate is, and we seem to know what sin is. But in the pursuit of time and in the pressure of everyday life and responsibilities, don’t we lose the consciousness of committing a sin?
Are the biblical seven deadly sins ”pride, envy, wrath, lust, intemperance in eating and drinking, sloth and greed” alien to us? The exhibition is not supposed to criticize, lecture or moralize. Its main goal is to realize the existence of sin in our lives and to encourage thought and reflection, to stop for a moment and ask the question, how many times a day do we sin? Is sin only in thought or in deed?
The presented photographs are only a “grain of reflection”, which is planted in the audience and as it flourishes, in thought and consciousness it can answer the question of what we are, what we should be, and what we would like to be. Good and evil. Sin and hatred. Which way are we going to go?
Katarzyna Kuś was born in 1987 in Bydgoszcz. In 2009, she graduated from the Academy of Fine Arts in Poznan, at the Graphics Design department. Her graduation work was “I say ‘no’ when I think ‘yes’.” In her works, she revealed the hypocrisy and lies we live in. In her thesis, titled “Pornography in art”, she ponders the border between art and pornography.
Also in 2009, Katarzyna Kuś went to the Netherlands, to study Cross Media Design at the ArtEz hogeschool voor de kunsten in Enschede. In 2011, she graduated there with a photo and graphical work “Seven Sins” and with a thesis on controversy in art — where she expanded her ideas from the previous thesis (pornography in art), writing about violence, pain and suffering — asking about its boundaries.
In 2009–2010, she participated in the Memento I and Memento II exhibitions in Enschede, organised by the ArtEz hogeschool voor de kunsten, presenting her audiovisual works.
From November 2011, her works were also presented in the Lans- Uylen gallery in Hengelo, where she showed her photos and graphical works related to Polish culture.
Katarzyna Kuś remains faithful to her interests photography and graphics, and her works can be found in private collections in Poland and abroad. 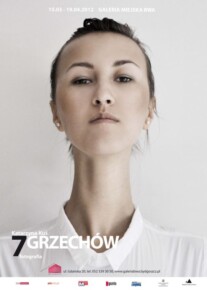