opening of the exhibition – 22.06.2009
In the partner city of Patras (Greece), the Patras and Bydgoszcz artists presented their works.

A first count
At the joint modern art exhibition by two cities, one Greek and one Polish, the meeting point can only be an artistic product. Any attempt for interconnection of any other type than that of idiomatic locale is impossible. It would restrict its perspective to suffocation and it would be reckless since modern art creation is not easily set in such schemes on a worldwide level. Art that is generated today is at a great extent the art of the creator; personal; temperamental; multiform as never before and supralocal. Art always registers the special features of its cultural space of origin, but essentially, today more than ever, in the infinite environment of the Internet community, is influenced by the whole world. In the case of the artists from Patras, who present aspects of their work in this exhibition, the main interconnection is that they move on the territory of the modern. Each one of them with an identifiable, personal work. In their majority they have studied or attended post-graduate courses abroad, at Western markets, and some have lived for years in the international environment and have presented mainly in the course of the past decade an independent and adequate work. As a total, their presence clearly shows the existence of a potential, still under tracing, which can represent the city, if the latter gives them that opportunity.
This local pool of modern creators is sparse, almost unknown, since there is lack of communication channels and has not been able to group and measure its powers. Even though there have been events and organizations, some exquisite venues that host art exhibitions and meet all requirements (such as the Bari warehouses, the Anglican church, the tests conducted at former Arsakeio school, this area of the Roman baths) and regular institutions operating towards that direction, it seems as if the feeling of the “whole” is missing.
The exhibition at the Roman baths attempts among these lines to get into contact some of the artists, at the double in the framework of a bilateral group exhibition,and attempt a small first count of what this city can currently present from an artistic standpoint.
Giota Konstatatou, Historian of Art/ Art critic (Patras)

The cultural dialogue between such distant cities as Bydgoszcz and Patras is, in its substance, a relationship between the works of particular artists. The participation of the artists doesn’t mean they are forced to give up on their own beliefs, but is supposed to facilitate a meeting with a culture that’s foreign for them. This, in effect, results in finding universal values and common roots in sometimes very different cultural traditions. The artists from Bydgoszcz selected for the Patras exhibition (Waldemar Domagała, Jakub Q Elwertowski, Anna Kubiak, Rafał Jara, Viola Kuś, Grzegorz Pleszyński, Marcin Sauter, Ryszard Wietecki, Wojciech Woźniak, Zbigniew Zieliński ZbyZiel) –resent works from various domains (painting, photography, video installation, art objects). Also the artistic conventions of presented works are different from nostalgic, quiet in colour portraits by Anna Kubiak, to conceptual, intentionally utopian layouts of Zbigniew Zieliński one of the representatives of the Szkoła Bydgoska artistic group. Beside the mysterious, abstract forms found in paintings by Ryszard Wietecki, provoking reflection on the inevitability of passing of human history, we found witty, painter’s take on his hometown by Kuba Elwertowski; reporter’s, though subjective record by Marcin Sauter; formal experiments of Waldemar Domagała and Rafał Jara; and social involvement via art of Grzegorz Pleszyński. Next to ironic photos by Viola Kuś, questioning the cult of the body that’s ubiquitous in our civilization, we found the works by Wojtek Woźniak, invoking the care for the values driven from the modern world of consumption.

The relationship of art and life – though understood by the artists in different ways – is, as one can see, undeniable. Due to the diversity of artistic conceptions, a question begs to be asked: about an universal criterion of art, and one feels tempted to look for it in the art of the partners in the cultural dialogue. After all, it’s justified to ask this question to the heirs of classic Platonic triad
Danuta Pałys 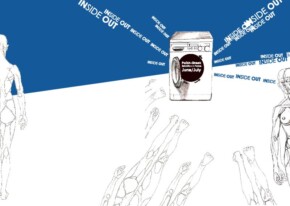