On September 8th, at the City Council, and on the next day, in the Old Town, an artist from Bydgoszcz, Grzegorz Pleszyński, performed an artistic action “Antidepressant Office”.
“…I carried out a survey, asking people for their opinions about the City Council. Most of them were very negative. People are stressed by the amount of errands they have to take care of, and by the arrogance of the officials. I myself came across this when I replaced my old driving licence with a new one. However, I think it isn&acutet the fault of the employees, it&acutes the fault of power. Offices only execute it…”

As a part of the project, the gallery had cards printed and then bound, according to the design: Antidepressant IDs – for everyone who showed up on the spot and wanted to have such an ID. In each ID there is a place for a photograph and owner&acutes name and surname. There is also a statement: “The Antidepressant Office hereby confirms that the owner of this ID is smart and peculiar”.
Those who did not have their photographs, were portrayed by Grzegorz Pleszyński. The owner of a card could also participate in the draw of drawings made by the artist and invited officials. At the same time, in the space of the city (in Poznańska, Sienkiewicza, Podwale streets), from September 1 to 30, the “Antidepressant Office” was promoted by three billboards with the ID of the peculiarity and smartness of the citizens. The action was also advertised by postcards sent or given out as invitations. The cards, billboards, as well as the postcards were designed according to three specimens, which differ in colour: yellow for children, red for women and blue for men. “…in my opinion, each of these people has different chemistry, different mentality, so they require separate treatment; we also shine differently in the light of the flower-stars, which are the background of the ID…” /G. P./

The Polish society, seriously tired by political, systemic and economic transformations, often feels depressed, is easily frustrated and irritated. To prevent this, the “Antidepressant Office” tries to convince everyone no matter if they succeeded in life or not – that they are peculiar and smart. At the same time, in the city space (on Poznańska, Sienkiewicza and Podwale streets), from 1st to 3rd September, “The Antidepressant Office” was promoted by three billboards. 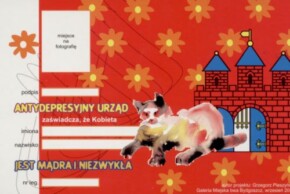