“David Lynch — Lithographs”
The opening ceremony: 25/11/2012 at 8pm
at the Municipal Gallery bwa in Bydgoszcz, Gdańska 20
Exhibition open until December 31st, 2012
The exhibition is organised by the Plus Camerimage Festival and the Municipal Gallery bwa in Bydgoszcz, and it is possible courtesy of the studio „Item Éditions” from Paris.
At the exhibition at the Municipal Gallery bwa in Bydgoszcz you will see dozens of lithographic works by David Lynch, one of the world-famous directors (“Twin Peaks,” “Wild at Heart”, “The Straight Story”). The director, who began his artistic adventure with painting, is also involved in lithography — he has already created more than 160 works in this technique in the Paris printing house Idem Publishers. These are not the only fields of art which he is involved in — he paints, takes photos and makes music. The exhibition will also showcase two short animated films by Lynch: “Six Figures Getting Sick” (1966) and “The Alphabet” (1968).
Lithography is a graphic technique where the drawing is done first on the lithographic stone, and then it is printed. One of these stones will be an additional attraction of the exhibition. The lithographic works presented in Bydgoszcz are mostly black and white and, as you can expect of Lynch, they are dark, full of surreal stories, disturbing in its understatements, referring to the death, pain, eroticism, they are just very… Lynch-style.
During the 20th edition of the International Film Festival of the Art of Cinematography PLUS CAMERIMAGE, David Lynch will be honoured with the Lifetime Achievement Award to the Director. On this occasion, an album dedicated to the life and work of David Lynch will be released. This exclusive publication, containing a rich collection of photographs from the private archives of the director, from movie sets, and reproductions of various non-movie works, will be available for purchase in the Festival Centre — Opera Nova during the Festival, and until the end of the exhibition at the Municipal Gallery bwa.

Shapes and Dreams
Drawn by David Lynch’s passion for evocative industrial spaces, the Director of the Fondation Cartier, Hervé Chandès, led Lynch in February 2007 to the heart of Montparnasse and to our lithographic workshop, built at the end of the nineteenth century. As soon as Lynch crossed the threshold of Idem Publishers for the first time, I knew instinctively that it would be a seminal visit. At that time he was mounting at the Fondation nearby his show, “The Air Is on Fire,” a comprehensive review of his creative journey for the past forty years. I felt that he responded to the creative energy that always circulated in this sanctuary, where the masterworks of Picasso, Matisse, Giacometti, Miro, Chagall, and many other illustrious artists were printed. Unhesitatingly, he accepted the spontaneously proffered invitation to come and work on the zinc plates and lithographic stones.
The lithographic stone has a unique ability to store all imprints of the greasy ink that is laid
upon it either by crayons, brushes, or even fingers. Lynch immediately seized upon the immense possibilities that were offered through this technique, which he described as organic. The ritual is already well established. For him, everything begins with the idea which, like alchemy, proceeds to intersect shapes with dreams, with ink becoming the catalyst. The moment is deeply focused and nothing interrupts the artist’s concentration, not even the noise of the presses, whose regular rhythms set the soothing pulse of the atelier. Out of the profound blackness tempered by infinite washes, the design appears, organically coming to life. Lynch pauses and writes several words or a sentence on the stone and, like a keystone, his words complete the work.
Choreographed like a ballet, the printers file in. Having been prepared, the stone is carried in the flatbed – that’s the long-awaited moment when the image is transmitted onto the Japanese paper. It’s a moment of adjustments and rarely of regrets. The knowhow of the lithographers melds with the talent of the artist and ends up with a “Good to go” command. The flatbed presses purr in pleasure.

So far, more than one hundred sixty lithographs have been created by David Lynch. The synthesis of man, artist, work and place is perfect. Time is suspended to everyone’s content.
Patrice Forest
Paris, 31 August 2012
www.itemeditions.com 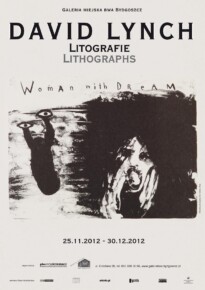