From Saarbrucken Perspective
25 years ago when Saarland Art House (Saarlandisches Kunstlerhaus) was created, the times were completely different. From the very
beginning it was clear that one of the main goals of this institution would be organizing and hosting exchanges in connection to presented
exhibitions.
As a result of referendum held in 1955 and the political division of the Saarland state as the tenth state of the federation located in the
southwest of Germany the local artists lacked not only contact with the artistic scene of the rest of the country but also had virtually no
connection with the neighboring Rheinland-Pfalz state.
The artistic scene of West Europe was in its core centered in France and especially in metropolitan Paris. At that time France had a
central government. It was only under the rule of F. Mitterand’s government that the Minister of Culture Jaques Lang loosened the policy
which was centrally concentrated on the capital city Regional activities gained recognition and local and regional culture institutes
expanded in larger agglomerations especially in capital districts of the federation states. However, increasing contacts was still difficult
to achieve. Gradually, joint meetings and mutual projects were organized. In 2004 Saarland Art House (Saarlandisches Kunstlerhaus)
arranged the first cultural project which crossed the borders within a larger region, it was entitled: ,,Mein Aldi – mon Cora – de Lux”.
Following that, in 2007 the whole region was for the first time proclaimed the cultural capital of Europe. During work at a bigger project.
.Mart an der Grenze” all five sub-regions started to cooperate which in effect led to a grand plein-air exhibition.
The fall of the Berlin Wall and connected with it decision of relocating the German capital to Berlin were further important events which
brought about the changes of the country’s cultural scene. The dynamic development of Berlin, its many museums and a myriad of new
galleries attracted artists from Saarland, who, since the establishment of Upper School of Decorative Arts (German abbreviation: ,,HBK-
Saar”), have been obtaining their education right there in Saarbrucken.
The termination of war between the East and West Europe opened up new perspectives. Eastern European countries which were
very feebly connected with the Western part were given the opportunity of discovering it again. In the beginning, based on personal
connections, Saarlandisches Kunstlerhaus [Saarland Art House] came in contact with Poland. For the first time cultural exchange will
take place with one of Polish cities – Bydgoszcz.
Since the beginning of 2008 a series of meetings have been organized between directors of the BWA gallery in Bydgoszcz and the
management of Saarlandisches Kunstlerhaus [Saarland Art House]. In the meantime the meetings turned into friendship the expression
and success of which is this exhibition project.
Taking into consideration spatial conditions of both galleries suitable artist were chosen collectively. Exhibitions, both in Bydgoszcz and
Saarbrucken, should take place at the same time. This catalogue will be published jointly for both exhibitions in three language versions.
When choosing the Polish artists we wanted to answer the following question: Does Polish art have a specific message? We suppose
that in spite of great flow of information and despite the use of so called “new media” one will be able to see specific “Polish aspects” in
the works of artists we selected.
We would like to invite admirers of art from the Saarland region to embark on the adventure of this exhibition. We greatly hope that
both exhibitions will arouse great interest and that viewers will want to familiarize themselves with the esthetic message of the artists
participating in the project. 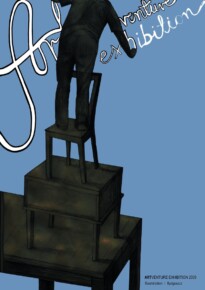