The curators of the exhibition are Dr Michal Bycko of the Museum of Modern Art of the Warhol Family in Medzilaborce and Wacław Kuczma director of the Municipal Gallery bwa in Bydgoszcz. Medzilaborce is a small, quiet Slovak city. Grey, dull buildings remind of the Polish reality several years ago. Only a brigh, big building and two enormous cans with Campbell’s soup labels inform this is the Museum of Modern Art of the Warhol Family. However, the originator of the pop-art revolution himself had never been to either Slovakia or Medzilaborce. He was born already in America – in Pittsburgh. It was his parents who had emigrated to the US from the nearby Mikov, and his relatives live in that village up to this day.
In the introduction to the exhibition catalogue, Michal Bycko writes: The content is not important, neither is the comparison of functionalities; what’s important, is the process of elevating banality (e.g. Campbell’s soup) from shops, newspapers (Marilyn Monroe and others) to the level of gallery, at the same time not forgetting the form of the presentation, bringing us again quite close (be it only visually) to icons iconostasis […] Andy Warhol repeats old, familiar motifs, but in works that make him the superstar of pop-art. Motifs of simple flowers, shapes, prints of little birds and stars that Julia Warholová liked to copy when she was still a facade and wall painter, elevated to the level of young Andy’s striving for an original means of expression in the initial period of his road to fame, were replaced by images of superstars, packaging of groceries, well-known situations and events which Andy turned into the icons of the second half of 20th century. The light of Andy Warhol’s superstar shines stronger and stronger. The world of old icons, their functions and aims, are consciously and unconsciously converted by Warhol into the world of the icons of the second half of the 20th century. „Iconostases” created from his cycles are still a typical sign of Warhol’s approach to presentation. In this same way, he changes the space itself into image. As if really everything was related to everything, and in the case of Andy Warhol, his philosophy and sense of art it seems more than certain […] No one can deny his American identity and the fact that he was one of the most famous Americans, but also the fact he was Ruthenian by origin, that the genes and bringing-up play an important role in the life of an individual, and especially in the life of a sensitive and neurotic personality, full of anxiety and uncertainty, but at the same time craving recognition and fame. That fame which hardly seemed to fill him up […] Andy Warhol is one of the greatest American figures, but at the same time, the least typical one. That neurotic and shy provocateur was far from American independence, self-confidence, coolness. To be a seemingly “real” American, to pretend extravagance like a superstar all that must have cost him a lot of effort and energy. He himself confirmed that, saying: „I have to go to a party. I have to take Valium again. A tranquilizer. Why? Why did he desire to be within the world of American fame and high society, but most gladly as just an observer? Why was he escaping from the world of superficiality to the safe shelter of his apartment, full of antiques, banal objects, to his mother, a simple country woman, to prayers etc.? Which of the two Andy Warhols was the real one?
Event co-financed by the Self-government of the Kujawsko-Pomorski District.

The works of Warhol presented at the exhibition in the Municipal Gallery bwa in Bydgoszcz come from the Museum of Modern Art of the Warhol Family in Medzilaborce and from private collections. 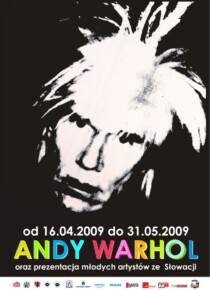