3xTOPOR is an exhibition of work by Roland Topor, his father Abram and son Nicolas. In addition to the fascinating family ties of the three artists, the common denominator of the collection presented in Bydgoszcz is Paris. It’s the source of changes and artistic inspirations. In this mythical city of art each artist creates their own reality. As a result, we are provided with new perspectives of becoming a human and an artist.
Curators: Alexandre Devaux, Marek Zieliński
Coordination: Marta Piastowska, Danka Milewska
The exhibition will run from June 20th to August 20th, 2017
Vernissage: June 20th, 2017, 6pm

Exhibition organised by the Rozruch Foundation, the Municipal Gallery bwa in Bydgoszcz, in cooperation with the Cultural Institution Ars Cameralis and financed by the Office of the City of Bydgoszcz.

During the course of the exhibition, on July 18th, 2017, at 6pm, there will be a meeting with Nicolas Topor and his guests: Ariel Termine from the Paris Atelier Clot, Bramsen & Georges and a French curator Alexander Devaux.
The meeting will be hosted by Agnieszka Taborska – writer, art historian, translator, lecturer in literature and art history at the Rhode Island School of Design, Providence (USA).

Marek Zieliński: Atelier, or an introduction to Planet Topor.
Although the artistic gesture of Topor is clearly recognizable, it actually defies naming. Maybe the “key to Topor” is the sign of Capricorn, because, since he was born under this sign, he’s got two faces – says Roman Cieślewicz (7). This perverse trope leads us to a unique family triptych, the parts of which are Abram, Roland, and Nicolas. Each of them has got and produces his own light, provides us with a different colour, different feelings. Immediately, the eye catches different trajectories of experience and other dramas, introduces us to the different perceptions of the world, opening new prospects of becoming a man. Please note, however, that this “normal” perspective still conceals many secrets and riddles.

Abram Topor was born on February 24th, 1903. At the Warsaw Academy of Fine Arts he chose sculpture as his subject. In 1929, his works were noticed and he was awarded a half-yearly scholarship in Paris. He decided not to return to Poland and he brought his fiancée – Zlata Binsztok. Abram was not able to support his family from his art, so he decided to follow in the footsteps of his father and opened a leathercraft workshop. In 1934 and in 1938, Hélène and Roland are born, respectively. Shortly after the outbreak of war, Abram was arrested and interned in a camp in Pithiviers, which he fled after two months. Thus began the war wandering of the Topor family. After the war, he returned to the craft, but in his spare time stood behind an easel. He paid particular attention to artistic and cultural upbringing of the children. After his retirement in 1967, he decided find fulfilment as an artist. He exhibited his works for the first time in 1971, in Bénézit gallery in Paris. Between 1973 and 1991, he took part in thirty individual and collective exhibitions. He died on October 9th, 1992.

Roland Topor was born on January 7th, 1938. His childhood was marked by the experiences of World War II: the escape and the need to hide. Like his father Abram, Roland chose to study at the Academy of Fine Arts. Having discovered the humorous drawings by Siné, he decided to give up painting and fully devote himself to caricature. Since 1958, he constantly published his drawings in the press and illustrated books published by Jean-Jacques Pauvert and Eric Losfeld. At the same time, he submitted some of his stories, full of black humour, to the “Fiction” magazine, where they appeared regularly since 1959. He won recognition for his cooperation with the “Hara-Kiri” and “Elle” magazines. In 1962, together with Fernand Arrabal and Alejandro Jodorowski, he set up the Panique group, which brought him closer to the avant-garde world. His art, diverse and original, covered a broad spectrum: from humorous drawings to illustrations to press drawings, graphics art, prose, drama to stage design, directing and acting. He died on April 16th, 1997.

Nicolas Topor was born on August 29th, 1963, in Paris. He was introduced to the word of art by his father, Roland, together with whom, in 1972, he edited and illustrated a book titled Un Monsieur tout esquinté (An all-battered guy). At the age of thirteen, he published the first book under his own name: Récits d’expéditions en Lagunie (Tales from the trip to Lagunie). He attended courses in painting at the Paris Academy of Fine Arts, after which he made several travels, through which he discovered various techniques for graphics and painting. Not giving up on painting and drawing, for a time he used to make short films for Kazikstan, a fictional world of which he was a self-proclaimed ambassador. Gradually, writing scripts and songs had come to the forefront of his life. At the beginning of the 2000s, he began performing on stage, singing the songs by his father and himself. Nicolas remains active as an artist (and his work is diverse and original), at the same time, taking care of the legacy of his father and leading a very intense family and love life. 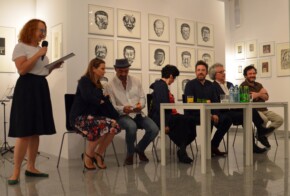 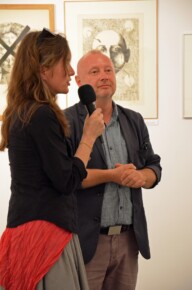 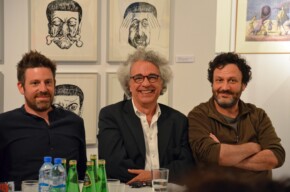 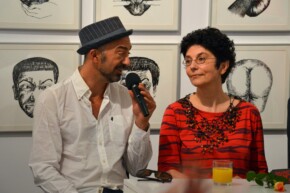 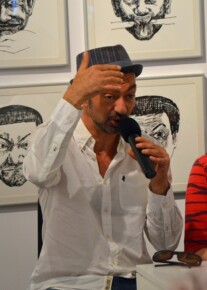 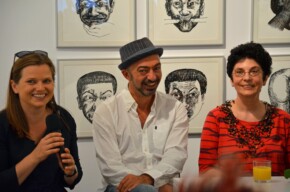 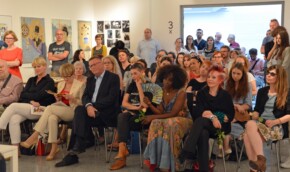 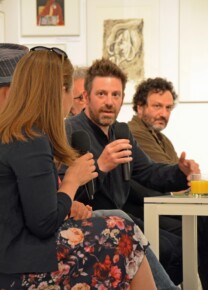 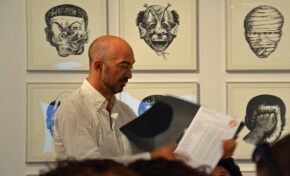