The period of socialist realism in Polish art of the years 1949-1955 for many of us has become a distant and mysterious era. It raises interest on the occasion of the anniversary exhibitions and events; it’s an area of controversial discussions and consideration of historians and art critics. In recent years, the group of collectors of the works of art of that singular trend has increased several times. With no small effort, they’ve been looking for images from these categories: “Red Banner”, “Power belongs to the working masses of cities and villages”, “An Oath”, “At a Construction Site”, “Welcoming the Young in the Mine”, “Thank-you to the Tractor Driver”, “The Countryside Reads”, “Heroic Mother Decorated for Bringing Up a Large Family”, „Polonaise A Flat Major by Chopin Played in the Forge of the Kościuszko Foundry”, sculptures: “The Head of a Worker”, “The Head of a Peasant Woman”, “Struggle”, posters: “Go to Work at the Constructions of Socialism”, “We’re Bringing Crops into Our Homeland”, “Soviet-Polish Friendship Means Peace, Independence, a Happier Future of Our Homeland”.
In the past, the works of socialist realism were bought and collected by the military and state cultural institutions and bureaus of artistic exhibitions subordinate to the Central Bureau of Artistic Exhibitions (present-day Zachęta), which after the system transformation of 1989 underwent various institutional transformations. Currently, the largest collection of socialist realism paintings, sculptures, prints and posters can be found at the Socialist Aryt Gallery in Kozłówka, near Lublin, established in 1994. In the former coach house of the palace of the Zamoyski you can see an extraordinary exhibition, which presents art subordinated to the socialist political and social doctrines, which was an element of the contemporary insistent propaganda. The exhibition is a warning against all forms and manifestations of creativity imposed and controlled by a totalitarian power. Ideological art of socialist realism was supposed to show people the right way of living in accordance with the principles of socialism. Interesting collections of socialist realism art are also in the National Museum in Krakow, Poznań, Warsaw and Wrocław, in the Museum of Independence in Warsaw and in the Poster Museum in Wilanów. Also worth paying attention to is the private collection of socialist realism posters gathered by Piotr Dąbrowski.
Jerzy Brukwicki 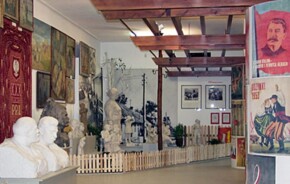