A lecture of the Bydgoszcz Academy of Art.

The 70th anniversary of the Municipal Gallery bwa in Bydgoszcz is an inspiration for the meeting, during which “spaces for art” created in the city after World War II will be recalled. When cultural life was revived in Bydgoszcz, the initiators of such activities, apart from musicians, were local artists. For a few years, from 1945, both co-existed in the building at 20 Gdańska Street (the former seat of the Casino Society “Wypoczynek”). The history of the Bydgoszcz school, which has been educating future artists since 1945, also begins in this building. Old buildings were adapted for cultural purposes, including the former Jakub Wichert’s theatre and garden complex (14/16 Grodzka St.) was turned into Teatr Kameralny. New facilities were also created, such as Teatr Polski (Aleje Mickiewicza 2), opened to the public in 1949, or the Pomeranian Philharmonic (6 Szwalbego St.), which celebrated its anniversary a year ago – the inaugural concert took place in 1958. We will not forget about the Municipal Gallery bwa, which after many years in the Pomeranian House of Art moved in 1970 to a modern building, which was described as “the largest pavilion in Poland” (20 Gdanska St.).

Agnieszka Wysocka, art historian, lecturer at the University of Kazimierz Wielki in Bydgoszcz, employee of the Kujawsko-Pomorskie Culture Centre in Bydgoszcz (Cultural Heritage Workshop), researches the history of architecture of the 19th and 20th centuries, author of scientific and popular science publications. 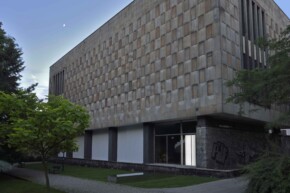