Tomasz Bukowskis paintings constitute a certain whole a cycle connected by the repeated elements of composition. These are arrangements of squares, or rather of multiplied triangles, the hypotenuse of which constitutes the vertical axis of the symmetry of an image, and the lettering appearing usually at the top edge of an image.
The elements used undergo colour and texture changes. They are never explicit. The painterly matter and colour are the basis, the essence of expression. The strong texture of a painting’s surface stops the light, creates colour nuances for the limited colour scale that was used. The power of effect of the matter the paint halts the eye on the surface of the canvas. After a while, the image becomes permeable, a space opens beyond the suggested arrangement of the foreground triangles. The depth of the image is seemingly unavailable, but it exists, just like the space beyond the image. The centre of the composition, in this case the middle of the image, focuses the viewer’s attention, but generally the feeling is of watching a fragment of non-determined, undefined space. The paintings are, by and large, abstract. They carry the power of painter’s gestures subordinated in this cycle to geometric construction. Colour planes and streaks permeate each other, the contrast is soft. Consciously used shades of grey soften the sound of pure colours. Colour and form are limited, minimalised. Repetition of a motive once sanctioned by the artist has its fundamental meaning. The artist, the painter, conducts a specific conversation with the subject worked on. The form, which is the source of inspiration, is presented in several parts and never stays the same, unambiguous in its message. The painter talks about his space, which undergoes modifications with time.
Whether he finished the story, I don’t know. I do know what inspired him to create a series of paintings in which painterly and abstract matters combine with reality. The indication are the letters making the word KINOWILDA. The buildings still exist, but the cinema is no more; however, the gate with the inscription KINO WILDA was preserved, and Tomek opens that gate every day, as it is entrance to his home.
Elżbieta Kantorek

He was born in Gniezno in 1969. Studied at the State College of Fine Arts in Poznan. In 1995, graduated under Prof. Jan Świtka. In 2000, received the Award of Critics and Journalists at the 18th Festival of Polish Modern Painting in Szczecin; and in 2003, a year-long grant of the Minister of Culture and Art. Lives and works in Poznan. Head of the V Unit of Painting at the Academy of Fine Arts. 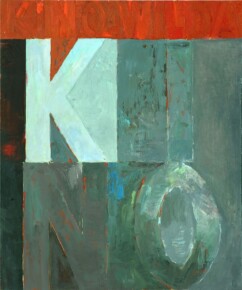