Night of Culture
Night Encounters with performance
The tradition of Nights of Culture at the Gallery reaches as far back as to 2004. The common denominator is the time, place and form of the presented art, which is PERFORMANCE.

…her art deals with problems of communication, reveals the role of emotions and
physicality in human relationships and building of identity, confronting
them with mechanisms of culture… (Joanna Sokołowska)

Born in 1978 in Gdynia. Graduated from the Sculpture Department of the Academy
of Fine Arts in Gdańsk. Got her diploma with honours in the Intermedia Study
of Prof. Grzegorz Klaman – with a performance “Jaka Miłość Taka Sztuka” (Like Love Like Art) in
2005. Studied in four schools: Mikołaj Kopernik University of Toruń, Academy of Fine Arts of Kraków, Academy of Fine Arts
of Poznań, Academy of Fine Arts of Gdańsk. She creates and documents performance art
(wideo, photography, text). She runs performance workshops. In 2006,
she created the PORT PERFORMANCE project, with BBB Johannes Deimling.
Author of objects and installations. Participated in numerous exhibitions and festivals
in Poland and abroad (Germany, Russia, Austria, Italy, Estonia, the Netherlands,
Isrćl).

Studied free arts in Hamburg, where she also lives these days. She is a movie and theatre director, performer, makes installations and works as a lecturer in the Art Academy in Offenbach on Main. Since 1997, Mariola Brillowska did in Germany – where she has lived ever since she studied free arts at the Art Academy of Hamburg – and in other countries over 30 club and gallery shows and plays in renowned theatres and art halls.

In Bydgoszcz, she will present an audio-visual performance “Córka krawatu” (Daughter of a Necktie).
It is a new performance in Polish.
The artist herself appears as the performer, compère and the daughter of a famous Polish necktie manufacturer, Jan Krawacki.

…..is a performer, dancer, an author for the Patrz Mi Na Usta Theatre.
In 1987-97 he was a co-creator of the Expression Theatre.
Since 1995, he has been running an independent, original theatre.
His theatre emerged as an opposition to drama theatre, psychological acting, mimesis, tradition of the Western theatre, Aristotelian poetics and domination of word. Transgenic, transsexual work of Dziemaszkiewicz aims to combine opposites, to ask questions about borders between bestiality
and humanity or divinity. His work reaches to premonitions, instincts, emotions. It opens up the limitlessness of mind, and, as a result, agrees to diversity, heterogeneity of the world. At the same time, he rebels against the dictate of ideology.
Drawing from the ćsthetics of kitsch, the author is motivated by a spiritual goal. Therefore, it’s not kitsch anymore, but a sign serving communication and encouraging contact with the viewer. It is not about shocking, it is about involving in the game, where the viewers and conventions can be manipulated to some extent. The exposed nudity is a manifestation of joy, naturalness, spontaneity.
Sincerity is the superior principle.
Dziemaszkiewicz is an artist living his art every day, in his work he combines drag, dance, ritual and cabaret. For Dziemaszkiewicz, theatre is life and can happen everywhere. Lack of compromise towards social restrictions creates the only unique language of artistic expression.
The creator is the person he wants to create himself, in the name of freedom of every human being.

In this year’s edition of “Night Encounters with performance” we will see: “I couldn’t sleep well…”, or thoughts on Poland… 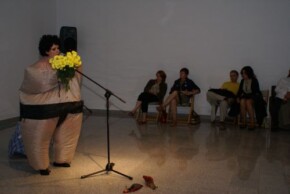