This is a special exhibition at a special time. For the first time in the Municipal Gallery bwa in Bydgoszcz, there is an opening and an online exhibition. We were afraid that during the whole exhibition there would be no physical contact between the audience and the works of art and the artist. The exhibition itself, the conversation with Marek Noniewicz and other events are shown online on our website, Facebook and YouTube. However, still offline, in paper form, we published the catalogue for this exhibition.
As of 15.05.2020, we made the exhibition space of bwa City Gallery in Bydgoszcz available to visitors again. Due to the threat of the spread of SARS-COV-2 coronavirus, the rules of visiting the Gallery have changed. You can find them on our website by clicking HERE.
In the “World Out of Time” project, Marek Noniewicz opens up his photographic archives, which become a pretext for a journey to the places where, in 2002, as a photographer and cultural animator, he took part in his first photographic-educational field project. The adventure in which he participated eighteen years ago became an excuse to try to evaluate the action and to organize another photographic workshops in the same places, in the villages of Jasionka and Krzywa in the Low Beskids, with a new generation of children born in the 21st century. Thanks to a scholarship from the Minister of Culture and National Heritage, Marek returned to the Beskid Mountains and once again, together with Paweł Kula, they ran a workshop while also taking photographs. Trying to recreate the action from years ago, they kept the tools in an almost unchanged form, using almost exclusively analogue photography.
Marek Noniewicz recalls the project: Eighteen years is a lot of time, especially if I haven’t had a chance to refresh my point of view. Even though I had pictures from years ago, it was just an image of my idea of what happened in Jasionka and Krzywa at the time; even if reliable, it was still tinged with emotions. So I wanted to bring back the landscape, maybe meet someone (…) The landscape did not disappoint me, although I could not remember anything. The roads seemed to run the same, but the potholes were already in other places, and what was on the roadside changed beyond recognition.
(…) A year for such a project is not enough. The workshop took place, but the enthusiasm of the young participants did not resemble the enthusiasm that accompanied the workshop in 2002 at all. But something did happen, the history repeated itself, or maybe it is better to write that the history restarted and continues? Because I know I’m going to have to go back to the Beskids.
Marianna Michałowska, on the other hand, in the text for the exhibition catalogue, ponders:
Is it worth going back to the past? Time cannot be turned back. Meetings after years usually turn out to be bitter-sweet and different from expectations. Photographs cheat by promising that nothing changes.
This mixture of expectations, illusions and unexpected clash with reality is well expressed by Marek Noniewicz’s photographic project The World Out of Time 2002-2019. The photographer made a special kind of re-photography in it – not even of a specific space, but an event from years ago.
(…)
That’s what Noniewicz wanted to check out, coming back three times at different times of the year to the area around Wołowiec in 2019. His story about this return is a narrative about attempts to make contact with people who co-created the project. While the activity from 2002 was mainly an animation – it was supposed to show young participants “some other world,” the return to Krzywa and Jasionka seems nostalgic. Broken ties are not easy to re-establish.

Welcome to the online exhibition. Let’s start with a few words from the curator and the artist

Here the author himself invites you straight from his car

We encourage you to browse the catalogue, which will be available online for some time.
Click HERE to get directly to the publication’s page.

Below, in the photo gallery, there is also a traditional photo report from the exhibition. 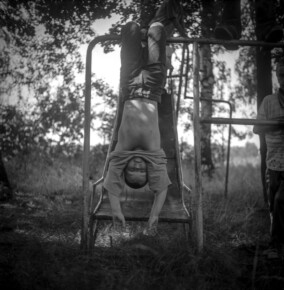 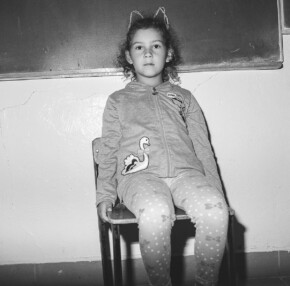 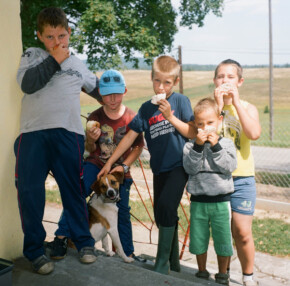 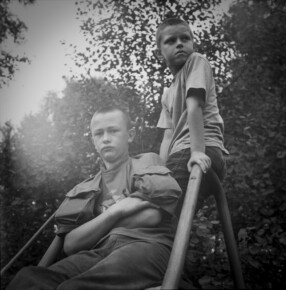 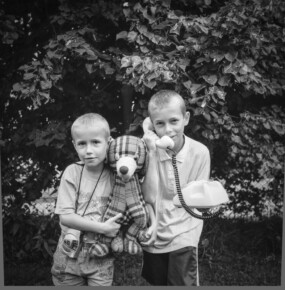 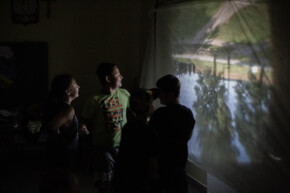