The CONTEXT exhibition presents two individual exhibitions by Patrik Kovacovsky from Slovakia and Marcin Berdyszak. Both artists started in the 1990s, and ever since have been cooperating artistically and in the field of education, as both of them are connected to art schools; Kovacovsky to the Academy of Fine Arts in Bratislava, and Berdyszak to the University of Art in Poznan. In 1993, there was a very important exhibition that got famous in the Slovak art environment, organised by Kovacovsky (then still a graduand) together with Marcin Berdyszak, Milan Titel, Matej Gavula and German artist from Kiel, Peter Sebastian Lange, at the Museum on Vajanskeho Nabreże in Bratislava. The exhibition was called „Prototyp”(„Prototype”), and after some time it’s become a cult exhibition showcasing the new area of interest of those young, débutante artists. The presentation of works by artists so different from each other, but marked with the enormous, ongoing changes taking place during their lifetime, is undoubtedly a point of reference in their current work, which not only reflects the current reality, but also looks back at the past, judging it from today’s point of view.

Marcin Berdyszak became known on the Polish art scene in the 1990s. One of his important creations was a bravado action titled „Fresh fruit table-Hommage a Gordon Matta Clark” from 1995, with a thousand lemons and a chain saw, presented in the Poznan ON Gallery. Berdyszak’s art oscillated around such subjects as the condition of the contemporary man, cultural stereotypes, unification, consumption, mechanical valuation of reality, standardisation of behaviours and feelings. Using the art of installation, object, performance, the artist deals with the myth of novelty, originality and innovative character of an artwork.

Patrik Kovačovský is an established artist belonging to the younger middle-aged generation of Slovak artists. His work moves through a wide range of media from drawing, painting, sculpture, and installation to video, and it introduces the author’s specific subjective dreamy intimate or playful vision of the world. In his artistic work, he favours the use of the spontaneous creativity and imagination that teeters on the border of visual art and non-academic creativity. In contrast with most of the comparable artists by generation that seemed to be &#8220;catching up&#8221; with the trends of international art during 1990’s, and in spite of its contemporary form, the work of Patrik Kovačovský is firmly rooted in natural continuity of certain artistic traditions of Central Europe and the development of the legacy of some European avant-gardes (for example constructivism).
Patrik Kovacovsky lives and works in Bratislava. After studying sculpture (Academy of Fine Arts and Design in Bratislava) and multimedia / film (AC California, USA) he works currently as a pedagogue at the Academy ( Since 2007 Head of studio Sculpture in Architecture at dep. of Sculpture, Academy of Fine Arts and Design, Bratislava, Slovakia).
He has exhibited at prestigious shows, for instance accompanying event/show of the X. Documenta in Kassel (Germany), 1997, La Bienalle di Vnezia Slovak Art for Free, Slovak Expostion, Venice, (Italy), 1999, EXPO 2000 Hannover (Germany), Multimedia and Film Biennial 2000 in Paris (France) New Connection, Veletrzni Palace, Praha, (Czech Republic), 2002, Sovereign European Art Award, London, (United Kingdomand), 2005, Autopoezis, Slovak National Gallery, Bratislava, (Slovakia), 2006, The 15th Tallinn Print Triennial, KUMU Art Museum of Estonia, Tallinn, (Estonia), 2011, and Arsenal Gallery, Poznan, (Poland) 2012 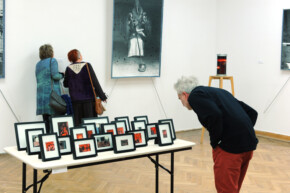 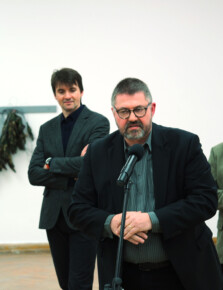