Born in Bydgoszcz. In 1989 graduated in painting at the Faculty of Fine Arts of the Mikołaj Kopernik University in Toruń. Between 1986 and 1990 cooperated with „Naprzód” and „Yach-Film”groups. Cofounder of the Artistic Society „Wieża Ciśnień”, between years 1994-2003 organised exhibitions at the „Wieża Ciśnień”Gallery in Bydgoszcz. She paints, creates objects and photo documentaries, „creative”embroideries, interventions in life and gallery spaces. Most often her works deal with subjects related to the private life of the artist.

Wandering with a camera around courtyards and streets helped me learn my new city, Warsaw, where I just moved to, and move sentimentally back to the cities that shaped me Bydgoszcz and Toruń. Looking into windows was for years my pleasure after all, who doesn’t like to peek at other people’s lives, see how they furnished their houses, fantasise about the occupants, guess who they are and how they live on the basis of the traces they left. Each window is a private space exposed for public view. It is with a great affection that I recall my neighbours from Osiedle Leśne, always sitting about in their windows. Although their ubiquitous control often made life a misery, I don’t hold a grudge, as it was their way for closeness, for participation in a peculiar courtyard theatre. Unfortunately, with each subsequent apartment I made attempts to isolate myself from the neighbours and hide my privacy. That privacy, sometimes purposely, sometimes unconsciously, manifests itself through the windows. Taking pictures, I was looking for traces of individuality, be it in architecture or in the life traces laundry, mess on the balcony, a dog awaiting its master. By windows one can see differences in city dwellers’ attitude to space. Residents of Warsaw have a strong urge to organise the space around them in accordance with their own points of view; to adapt balconies for their needs, even the ubiquitous bars protection against thieves are full of fantasy, each with different pattern. Maybe they need to abreact the crowding; permanent crush; tiny inhumane metric areas of Warsaw flats; un-city-like, awkward space of the city built higgledy-piggledy. Residents of Bydgoszcz and Toruń are more disciplined, don’t change everything so passionately as people from Warsaw. Residential blocks are not marred with balconies turned cubby-holes, sheds and bowers; facades stay as the architect designed them. And here all the wonderful architecture survived – the evidence of the imagination of past generations and, fortunately no one is putting plastic windows on historic buildings just yet. Everybody is asking me why didn’t you paint it? Well, it was a great pleasure to walk with camera through the courtyards, talk to people, get to know the city. Definitely more pleasant than to sit in a study and paint. 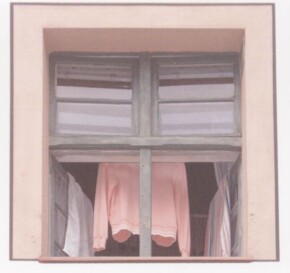