presentation of video art by Krzysztof Skarbek, together with a short lecture by the author

Krzysztof Skarbek (born 1958, an associate professor at the Academy of Fine Arts in Wrocław) deals with many forms of art: painting, drawing, film, photography, designing, stage design…
He started experimenting with movies already during the studies.
„…It was a new medium for me, it allowed me to convey the contents indicating the passage of time and multifaceted problems of illusion of movement and space… „
As an annex to his painting degree, he made a movie „ Zmieniaj się” (Change yourself) (1), in which, through a painting-drawing animation, he showed the problem of social communication
. Its message was a strive for positive human relationships.
After experiments with photosensitive film, new possibilities of creation were introduced by video technique. Here, an experiment for an artist is, among others, to use painting as an element of animation. „…Static forms of a painted picture are set in motion, resulting in time-restricted changes of shapes”.
From the video technique Skarbek takes the possibility to overlap voices and codes, as well as a chance to edit and digitally process the shots, which helps him build tension and stress emotions. To this, also the sound is added.
In „Podaj rękę” (Give me your hand) Skarbek used the „found footage” technique
and gave up the traditional cause-and-effect relationship.
Events started in one take of the movie usually had an unexpected ending in the subsequent sequence.
Skarbek also creates video movies, recording artistic actions during the openings of his exhibitions, or actions undertaken with students outside the academy&acutes study.
Cooperation with television in 1993-1996 (co-authoring art programmes) helped the artist broaden his experience with electronic devices for imaging.

Therefore, contact with movie art of Skarbek gives us a chance to see a fuller picture of his concept of art, where the most important aspect is to directly experience the joy of existence in its most positive way of communicating with another person.

1 The „ Zmieniaj się” movie was awarded at the 3rd International Festival of Non-commercial Movies, „ Movie beyond cinema”, Wrocław, 1985
2 The „ found footage” technique means making movies from already existing fragments of other movies. Due to different editing, they acquire a completely different meaning. Nowadays, in this technique one can trace the roots of computer sampling, remixing and digital deformation. 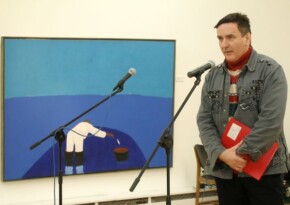