The oldest, seventeenth and eighteenth century iconography of the city is formed by several preserved drawings and engravings – a panoramic view from the south side on the copperplate made from a drawing by Eryk Johnson Dahlberg (1657); a drawing by Johann Rudolf Storn (1661), showing the city from the southeast; and the copperplate by an anonymous engraver, showing the battle on the Gdansk bridge during the Kosciuszko Uprising (1794). This humble set is complemented by Paul Johann Greth’s early city plan (1774). (…)
Since the mid-19th century, photography has played a significant role in documenting the city’s views, and has been used by artists ever since.. The first photographic “portraits” of Bydgoszcz buildings appeared in the 1860s, in the works of Theodor Jopp and Rudolf Brandengeier. (…) At the turn of the 19th and 20th centuries, the way in which Bydgoszcz was depicted was changing increasingly, widely popular photography took over the documentary functions, and the views of the city were more often created from aesthetic needs, realized in individual artistic conventions. In the first decades of the twentieth century, the work of German artists stands out (…) In the post-war period, graphic and painting “portraits” of the city on the Brda River were present in the works of Bronisław Z. Nowicki, Anna Sroczanka and Marian Turwid.. The artists’ interest focused on architectural views of old and new churches, public buildings and streets, squares and corners of the city with interesting architecture. The picturesque Venice of Bydgoszcz was of particular interest to the artists.
Barbara Chojnacka 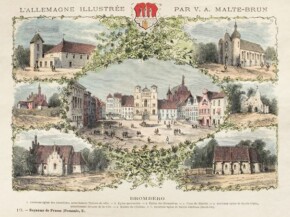